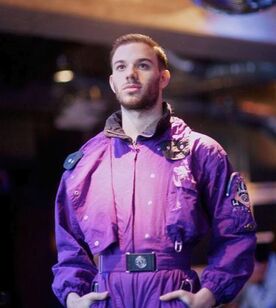 BIO
Stuart B Meyers is an interdisciplinary artist and performer working in dance, theatre, ritual, parties. Inspired by the overlap in his queer and Jewish identities, he creates shapeshifting, time-defying performance works which crack open perspectives, awakening audiences to their bodies and spirits.

Stuart also organizes Brooklyn's new Queer Jewish Dance Party FLAMINGGG, which in its inagural year has already hosted 600+ people. Stuart is an educator for Ping Chong + Co, is a certified Hypnotist (IHF), and reads Tarot + Dreams through a Kabbalistic tradition (trained by Bonnie Buckner & Catherine Shainberg of the School of Images). @stuartbmeyers
​

I am a creator of experiential spaces, integrating dance, theatre, and design into interactive community rituals and events. Weaving together queer pop-culture, communal Jewish spiritual practice, and experimental choreographies, I work to open portals into the dreamfield, or opportunities for revelation. As a queer and queer Jew who grew up being told they should not exist, who found affirmation in the act of artistic creation, I hope to offer these environments to audiences untouched by conventional modes of performance, insisting that sustainable intimacy, awareness, and expansion are possible for all of us, that there is room for each of our uniqueness.